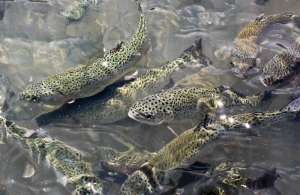 “Wolf Creek National Fish Hatchery was constructed in 1975. This is one of the most recently constructed hatcheries in the federal hatchery system.

This station currently produces approximately 1,000,000 trout weighing 250,000 pounds annually. In cooperation with the Kentucky Department of Fish and Wildlife Resources, fish are stocked into 115 different public fishing waters in the state. No private waters are stocked. The majority of the fish are stocked in waters controlled by the federal government. 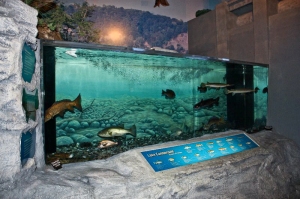 This is a National Fish Hatchery which is administered by the U.S. Fish & Wildlife Service and is supported by your Federal tax dollars. Fish raised on Federal hatcheries are stocked in public waters to support Federal fishery responsibilities mandated by law. These include fish for mitigation where, for example, man-made dams have altered a stream’s natural reproductive capability; to recover threatened or endangered populations; to restore interjurisdictional fish populations, or to support depleted recreational fish populations in Federal and state waters.

Over a century ago, it was recognized that conservation measures were necessary to maintain good ﬁshing in our public waters. Fishing has always been one of America’s leading forms of outdoor recreation. The primary responsibility of the Wolf Creek National Fish Hatchery is to raise rainbow, brown, and brook trout which will help preserve this tradition for present as well as future generations of Americans.

Construction of a dam, regardless of its type, alters the entire environment within a river. The ﬁrst and most obvious change takes place when the reservoir ﬁlls, but many changes may also take place below the dam. Some of them might be subtle, and others, like those in the Cumberland tailwaters, might be quite drastic.

Wolf Creek Dam produced a large, deep reservoir in which the water stratifies into temperature layers during the summer and fall months. The water released into the Cumberland River comes from a deep, cool layer. It caused a loss of the original warm water ﬁsh habitat and replaced in with the present cold tailwater. 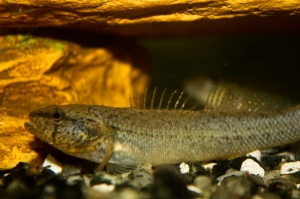 Spawning operations are not conducted at this station. However, Federal hatcheries in Tennessee, West Virginia, Wyoming, and Montana hold adult trout (broodstock) which are spawned artificially. After the eggs are taken and fertilized, they are held at the station until they develop to the eyed egg stage. Then the eggs are shipped overnight to production hatcheries like Wolf Creek National Fish Hatchery to hatch.When the station receives eggs, they are disinfected to prevent spread of fish diseases. They are counted using volume metric displacement and then placed in the hatching jars.

Eggs hatch approximately 10 to 14 days after they are placed in the hatching jars. The fry are then transferred to the rearing tanks where they remain another 10 to 14 days until they absorb their yolk sacs. As the yolk sacs are absorbed, the fry swim to the water surface and are fed specially formulated feed hourly. When the young fry reach approximately 2 inches they are called fingerlings. When the fingerlings grow 2-3 inches they are moved to the outside raceways where the larger fish are kept.” (Information was obtained from the U.S. Fish & Wildlife Service) Visit their website for more information.  http://www.fws.gov/wolfcreek/aboutus.htm